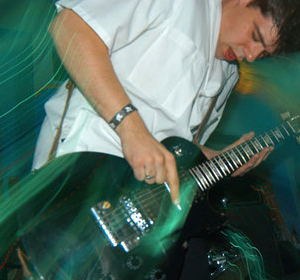 “Brooklyn’s greatest living noise rock band” prepare to assault your ears from every angle at the Green Door Store.
Eight albums into a prolific career that’s seen the New Yorker acknowledge them as noteworthy beside Animal Collective, Yellow Swans and HEALTH, Sightings strike an unmatchably jarring note with their deconstructive rock. Their seemingly structureless hazes of screeching guitars and lurching bass, detuned vocals and surging drums, sometimes obscure an underlying precise, razor-sharp attention to detail: four instruments fed through tape echo machines, filters and delays all pile together into a blend of industrial and hard rock textures so discomfiting that their critics struggle to pin them down as either “without antecedents” or in a lineage including Black Flag and Throbbing Gristle. The only thing they agree on is that Sightings are loud as hell and don’t sound quite like anything else.
Also described as a fundamentally live band – each of their records has emerged from studio jams, rather than any initial song ideas – Sightings’ destructive music creates a disorienting disparity between audio and visuals on stage, where trying to trace the process of their sound seems impossible. Fundamentally brutal and deeply experimental, their live show comes across as somewhere between a punk rock show, a piece of performance art and a religious experience.
Featuring support from local hard-edged pop-punksters Sealings and Eastbourne experimentalists Mothers Of The Third Reich. Face the noise if you dare.
£6.50 adv from Resident, online or in person, 19:30-22:30.
See Gigantic.com for more information