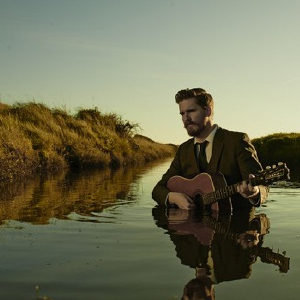 Devon troubadour John Smith, his fame rising as gently as his whispered folk, plays Komedia around the release of his third album.
Despite being as low-key in style as in his marketing and forgettable name, John Smith has seen unprecedented attention and affection from musical greats. As well as Josh Homme and Eddie Vedder having announced themselves fans, Smith received much support from his natural musical ancestor John Martyn, whose pre-eminence in the 70s folk scene stemmed from a similar deftness of gentle folk strokes. As well as receiving numerous early support slots from that late folk icon, Smith has gone onto support folk revival godfather Davey Graham, Lisa Hannigan, Iron and Wine, Seth Lakeman and anyone else with acoustic repute you can think of. Recently playing the prestigious slot on The Tonight Show with Jay Leno, it seems that people are starting to take note of his presence in these circles. Three albums in, they are finding a hoarse voice and dextrous folking fingers in a 20-something who resonates with that mythical ‘wisdom beyond his years’.
Very much a part of the troubadour mythology, Smith has gone from touring small UK venues with his first album’s haunted, rasping melancholy folk, to recording his second album in harrowed backwaters of endless American roads, and after a period of crippling writer’s block, re-imagining his sound to make it more widely accessible. The new songs abandon gritty guitar percussion and dense melodies in favour of more universal themes of love and yearning, to tunes more readily palatable. Finally starting to make some real headway off his own back, Smith’s troubadour stripes are out for the world to see, and his show at Komedia provides an unmissable chance to catch ‘the future of folk music’ (according to John Renbourne) on the upside of his wave into greater notoriety.
19:30, 14+, £8 ADV + BF.
See Komedia.com/Brighton for tickets and more information