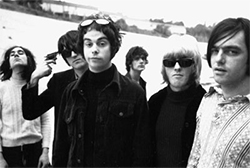 Like a chameleon on a merry-go-round, The Brian Jonestown Massacre have changed their line-up so many times it’s hard to say who they really are. Yet far from blending into the background, they have often been at the forefront of controversy. Their tumultuous relationships, drug problems and feuds with rival bands were brought into the limelight in the 2004 documentary “Dig!” which followed them and The Dandy Warhols as they toured together. But since then their steady blend of shoegaze, psychedelic rock and American folk has earned them an established place on the international circuit. Now, the BJM come to Brighton with lead singer Anton Newcombe and reunited former member Matt Hollywood as part of the band’s European tour, promoting their more experimental new album, “Revelation”. As it happens, The Dandy Warhols will also be playing at the Concorde in July, so if you want to catch a glimpse of how the bands compare ten years on from that fateful documentary, it may well be worth going to both.
Doors: 7:00pm,
Tickets: £15
Age restrictions: 14+
www.brianjonestownmassacre.com
www.concorde2.co.uk
Tickets from www.seetickets.com/event/brian-jonestown-massacre/concorde-2