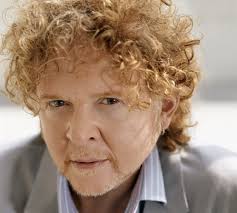 Mick Hucknall is simply red. Note the lack of upper case here, for I’m not suggesting that the successful 90’s act fronted by the mercurial Mancuian were little more than a one man band. Honest.
No. When I say Mick Hucknall is simply red, I mean to suggest that shades of magenta colour the crooner’s life in a way that makes Johnny Cash’s attachment to black, (which isn’t even a colour anyway, Johnny), look positively apathetic. Hucknall, on the other hand, is dedication personified.
Let’s look at the evidence. For a start, there’s the hair. True to his, er, roots, pop’s definitive Ginger Prince never once cowed to the discrimination meted out to many of his copper-topped compatriots, instead using his auburn locks as a foundation upon which to build his musical career. Red – 1, Black – 0.
Secondly, there’s his lifelong devotion to Manchester United, a team who, for anyone impervious to the ever-encroaching tentacles of the English Premier League (and there can only be about one of you out there), play predominantly in a strip of pure vermillion. Well, kind of. But as a supporter of the Red Devils, Hucknall again proves his love for all things rubicund. 2 – nil to the reds at half time.
Finally, we have the politics and, as a prominent ‘celebrity’ supporter of the Labour party, Hucknall once more waves the red flag of scarlet solidarity. In fact, if the singer’s Wikipedia page is anything to go by, the russet warbler’s influence on the British electorate may be greatly underestimated. ‘In 1997’ so the page reads, ‘ he (Hucknall) declared his support for the Labour Party at that year’s general election – which it won by a landslide under the leadership of Tony Blair, to return to government after 18 years in opposition.’
So, it appears it was merely Hucknall’s reticence on the subject of party politics that was holding back the years of Labour governance. However, due to my lack of understanding regarding the subtleties of the British political system, I can only vaguely point to such allusions. What I can more safely state though is that the final score (if you’re keeping up which such things) finds red three to the good, which really shouldn’t come as much of a surprise, as considering Hucknall’s still filling the seats after nearly 40 years in the business, red is simply the only colour to back.
Starting at 7:30pm, £50/£40/£35 in advance
For more information and tickets, visit mickhucknall.com
Follow him on Facebook at facebook.com/mickhucknall
Words Ed Kirby

Preview, US Bombs, The Hydrant, July 10

5th February 2013
Subscribe
Connect with
Connect with
0 Comments
Inline Feedbacks
View all comments
SEE XYZ IT'S ON! Click for more