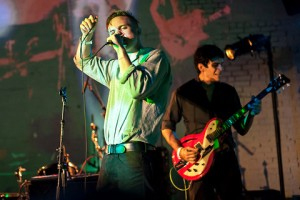 This Florida three-piece are harder to peg down than a shimmering sheet in a hurricane, and no less broad and stimulating.
Emerging from the DIY/hardcore scene of Tampa, Florida, Merchandise’s erudite political and intellectual stripes are the only thing about them that fit the hardcore mould. More often compared to noise pop and shoegaze peers, they nevertheless struggle to even adhere to those conventions. Instead, they describe their songwriting as more influenced by Miles Davis and Hollywood musicals. To say that would still over-simplify the band’s sound, stretching airtight riffs out into gargantuan grooves, all fed by Carson Cox’s Morrissey-ish lilt and a tonne of way out effects pedal haze.
Now with three LPs under their belt, including a doe-eyed 8.0 badge of approval from Pitchfork for this year’s effort Total Nite, Merchandise are steadily becoming underground legends – XYZ’s May front cover band Drenge even singled them out as ones to watch. Though they’re determinedly non-traditional (insisting on avoiding mainstream venues and labels), and employ alternative musical strategies with fervour – exorbitant track lengths, occasionally nightmarish volume and distortion – at the root of them, Merchandise’s vibrant sonic flourishes swirl around a core of super-tight hooks and Cox’s 80s-reminiscent vocal melancholia (think The Cure, New Order). For far out dudes, Merchandise remain very close to the shore in terms of approachable, pop-packed numbers.
Live, Merchandise are known for betraying their hardcore roots, with an unstoppable vigour that prevents their waves of noise simply washing over an audience. Rather, Cox is known for Ian Curtis-esque microphone-gripping freakouts, and as a band who started out playing punk shows in storage containers, there’ll be no ignoring Merchandise when they take to The Haunt’s narrow interior. Come for heady, slow-burning jams with a razor edge that’ll be impossible to ignore, and harder to forget.
£8.50 adv + BF, 14+, 7-10pm.
Words by Callum McLean
Head to thehauntbrighton.co.uk for more information and to buy tickets, also available from Resident Records.