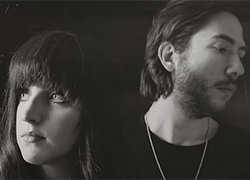 The Bristol alt pop duo kick off a string of live dates at the Haunt, Brighton in celebration of their latest release, the “Dual” E.P (out March 30 on Believe Recordings).
The band’s first tentative steps into the pop world were well received with high praise for their debut E.P, “Three Six Five”, in May of 2014. And their latest single “Eyes Wide” highlights how their melancholy pop sound has progressed, with a cleaner, grandiose design courtesy of production flourishes from Ant West (We The Wild, LAYLA).
Ambient acoustic piano sits delicately beside the fragile beauty of vocalist Kate McGill’s voice, whilst uptempo electronic beats give the track a contemporary yet organic heartbeat.
The upcoming tour takes them the length and breadth of the country and culminates at Dublin’s Academy 2 (see dates below).
meadowlarkofficial.tumblr.com