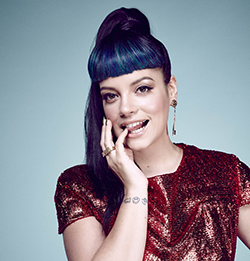 Returning triumphantly after a short hiatus, 2014 saw Allen’s satirically titled “Sheezus” enter the charts at no.1 and spawn several top flight singles. Her festival performances, including Glastonbury’s Pyramid Stage proved motherhood’s diminished none of her swagger and her US tour alongside Miley Cyrus no doubt set tongues wagging (Miley Cyrus tongue joke there!).