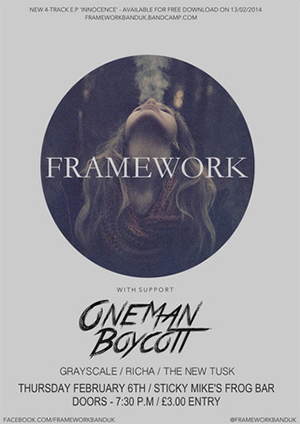 Framework are a dirty post-grunge trio, hailing from the small town of Barnstaple, Devon. The band cites the sounds of early Weezer and alternative rock acts like Brand New and Seahaven as major influences; along with Pizza, old Simpsons episodes and cheap booze.
2013 saw Framework opening for bands such as Gnarwolves, DADS, Scholars, Max Raptor and more – With a new 4 track E.P, Innocence, set to be released on February 13th – Framework are embarking on their first UK tour.
See event on facebook here
Date: Thu 6th Feb 2014
Time: 7pm – 11pm
Entry: £3