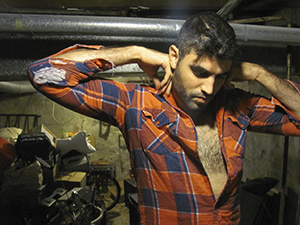 Pennsylvania alt-country rising star Daughn Gibson promises to rattle The Haunt’s foundations with his earth-shaking baritone.
Despite hailing from Pennsylvania, Daughn Gibson drips with so much Southern machismo, you’d expect him to breathe whiskey, biscuits and grits. What he does breathe though is the most ear-smothering bass-baritone since Crash Test Dummies’ Brad Roberts hummed his way across the charts with ‘Mmm Mmm Mmm Mmm’ in 1993. Unlike CTD or what you might imagine to be Gibson’s peers in country music, his music glimmers in places with notes of electronic production, and lyrically his songs stretch from painting southern dives and small-town debauchery to tear-jerking tales of suicide and tragic character portraits. It’s only appropriate that a voice so overwhelming as Gibson’s has something to say worth listening to, and he doesn’t disappoint, renowned for being a vivid yet subtle storyteller, with tales stretching from the train tracks to the bartop.
Stepping into the media’s eye this year with his second album Me Moan released by Sub Pop, Daughn Gibson is fast becoming a confident and layered artist beyond the novelty of his ancient-oak voice. Live, he now boasts a roster of numbers that stretch together a burgeoning tapestry of tales, sewn together with an eclectic jumble of samples and electronics, as well as acoustic guitar and piano. When Gibson’s hulking frame takes up The Haunt’s intimate stage, you’ll want to pay attention to this gravelly storyteller, if not for his evocative yarns then for his vibrant musical palate.
£9 adv + BF, 14+, 7pm.
Words by Callum McLean
Follow at daughngibson.com
Head to thehauntbrighton.co.uk for more information and to buy tickets, also available from Resident Records.