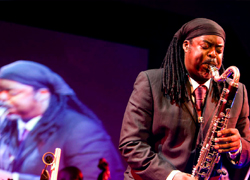 Britain’s most famous saxophonist brings merengue-calypso vibes and a stellar repertoire to Komedia.
Kicking off a long, colourful career with “the first serious jazz album ever to make the British top 40”, Journey To The Urge Within, Courtney Pine CBE has since brought his highly spiritual music through avenues of reggae, hip hop and drum’n’bass. Never has he approached his Afro-Carribean roots so deeply and explicitly as on his latest album House Of Legends, which combines an all-star ensemble spanning many generations with a palette of Carribean sounds spanning calypso, mente and ska – a contrast to 2011’s Europa, an exploration of his European travelling entirely led by bass clarinet, one of the hardest instruments to play in jazz.
Drawing on all these facets of Pine’s eclectic career, his show at Komedia will be notable for its non-muso-accessibility, his famous energy and contemporary sensibility keys to his continued success. For high class players in an exotic, modern mode, you need look no further than Gardner Street this February.
£18 + BF, 20:00
See komedia.co.uk