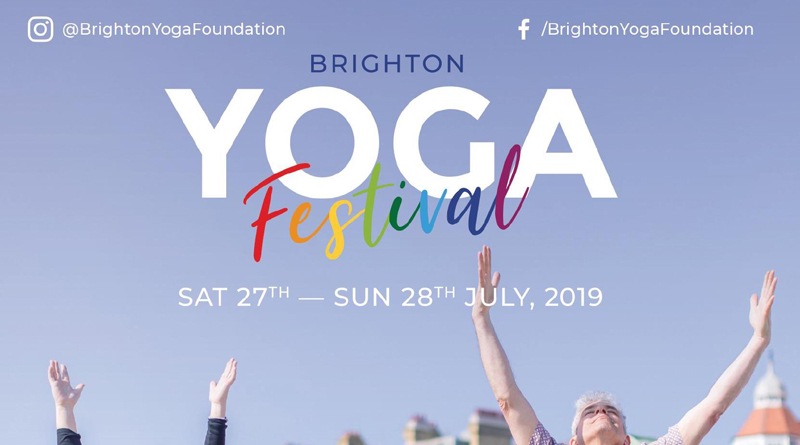 Mayor of Brighton and Hove Alexandra Phillips is set to open this year’s event, back for it’s sixth year to the new home of BHASVIC (Brighton, Hove & Sussex Sixth Form College)!

This year’s programme will see 100+ yoga classes and workshops, inspiring talks, a meditation zone, a wellbeing marketplace, food and drink stalls, live music and a kids’ zone with games, activities and obviously, yoga! 2019’s theme is “Yoga for everyone”, and the message is whatever your age, experience or fitness level, come along as there’ll be something for everyone!

In terms of highlights, this year’s event will include a range of highlights, such as an appearance from leading international yoga tutor Emily-Clare Hill, through to Clare Maddalena, creator of pregnancy yoga experts LushTums and the yoga company for children; WiggleBums. There’ll be a Qi Gong session with the founder of Infinity Foods and the Brighton Natural Health Centre, Peter Deadman, plus two talks with Sri Vijay Gopala, the founder of Yoga Gita in India.

Want to kick the day off with an active start alongside fellow event goers? Why not join Brighton’s Vegan Runners in a pre-festival run to the venue on the Saturday, followed by the chance to get involved in a specialist yoga workshop for runners?

With so much going on, this year promises to build upon previous years with another fantastic community event, with this year’s festival being a ‘pay what you can afford’ entry price.

All funds received are directed to the Brighton Yoga Foundation’s crucial community outreach work throughout the year, such as yoga for women recovering from trauma and abuse, yoga for stressed out teenagers and yoga for those with mental health concerns.

Tickets: Avoid queues on the day – register now & donate what you can:
Brightonyogafoundation.org/brighton-yoga-festival/#BYFRegistration