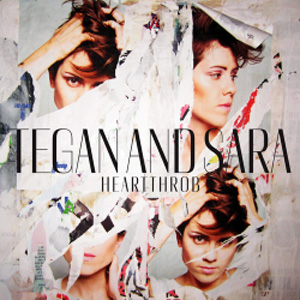 The Canadian twins are back with their seventh full-length album, and it’s an interesting little number. They’ve pretty much leaped off of their established band-wagon, and are embracing pop, not with open arms, but with a highly inappropriate and handsy bear hug.
The album opens up with some upbeat noise. The first stumble for past fans may come in at ‘I Was Your Fool’. It’s a bit too saccharine, a bit too manufactured, compared to their past works, and there are a couple of tracks like this. It’s not clear if it’s intended, but there’s a lot of similarity to pop-icon stars from Destiny’s Child to Katy Perry, and this may explain away the oddities of the cavity-causing tracks. There is also a whole heaping of 80s and 90s backing sounds, calling back to some great pop-performers, including Michael Jackson and Bonnie Tyler. The album pretty much consists of electro-synth pop of varying tones, against T and S’s still quite melancholy lyrics.
The vast majority of tracks are infectious and endearing, and it’s a safe bet that there’s already a contender for many ‘Album of the Year’ lists here. They wanted to make a pop-album, and there is no question that they’ve hit the mark. With unerring skill and simulation. A perfect album for the girls, and likely a guilty secret for a number of the boys.
Pre-order the album at iTunes.com and learn more about the sisters at their website, TeganAndSara.com