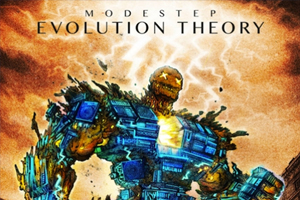 London dub-rockers Modestep are releasing their debut album this January after hitting the scene almost two years ago with first single, ‘Feel Good’. The band appeal to fans across some distinct genres, and over the course of those two years their singles have been frequent players on the Radio 1 A-list.
The album opens well, with an incredibly varied range of tracks, and title track Evolution Theory becomes something of a grab bag of different dub styles, with each guest artist having their own segment.
The album has two main approaches in its tracks – there’s the introspective chillout sounds such as Time, which can border on a ballad style approach, or the more visceral tracks such as We Will Not Fall, and of course Feel Good.
Bite The Hand stands out as the top track on the album, an industrial merging of Nine Inch Nails in the early 90s and the Beastie Boys. The major downfall is that tracks can become somewhat samey if sat through in order, and Praying For Silence stands out as being too tame in tempo for its message.
Overall, it’s a great start to the album discography, will appeal to a variety of music lovers, and can help you relax after a heavy night out or get ready to kick one off.
8/10.
The album will be released in a standard form, a deluxe edition and on vinyl. The standard issue will have 14 tracks which include collaborations with D Power, Jammin, Frisco & Jammer, Document One, Foreign Beggars and the Newham Generals. The 2CD Deluxe Edition has 7 bonus tracks including two brand new songs, and the double 12″ coloured vinyl comes in a PVC bag, has 14 tracks and some nifty stickers.
You can check out the album teaser below to whet your appetite.
To find out more about Modestep, go to modestep.com