There is an enticingly strange selection of sounds emanating from Audio’s basement room tonight. An unholy union of trance and techno assaults the senses, played with power and intensity by an odd looking quartet, whose only connection seems to be a telepathic understanding of how each track should evolve.
While The Field started life as one man’s experimental DJ project, the recent release of second album ‘Yesterday And Today’ hinted at an evolution in sound, from bedroom atmospherics towards a more varied musical palette based around live instrumentation. As a result, tonight’s performance is enriched by the heady throb of a live bassist, the cataclysmic drumming of a man who bears an uncanny resemblance to WWE’s The Undertaker, and the fruits of a man sat with a laptop who is either a vital component of the group’s sound, or is simply an accountant sat doing their tax returns.

In amidst the chaos, stands Axel Willner, hunched over an array of mixing equipment and looking somewhat like a depressed Nordic fisherman. The Field is very much Willner’s project, and as such, he remains the focal point around which his live cohorts must work. The simplest of basslines weave in and out of the mix, fleetingly pushed to the front, before being swallowed in the melee surrounding them, whilst the tiniest alterations to the drum patterns help slyly subvert the rhythm of each track, in a way that seems almost unintentional. Indeed the focus on repetition within each piece often gives the listener the impression that they have been listening to the exact same song for several minutes, before suddenly realising that its fundamental principles have long since been changed in their entirety.
The overall effect occasionally makes for a rather disconcerting experience. The outward simplicity of each track constantly negated by the scope for alteration that the band finds within them, twisting each phrase into something vibrant and new. Most importantly though, The Field provide uplifting ammunition for those who simply came to dance. While most revellers are left in a trance like state of hypnotic wonder at the whole experience, there are still a fair few flailing limbs about to endorse the pure pleasure derived from the ominous bass rumblings, compressed drums and eerily distorted house vocals of tracks like ‘Over The Ice’. In fact, come the final song of the set, the crowd are practically baying for an encore, which they are given with a joyous rendition of ‘A Paw In My Face’. It leaves an indelible print of happiness and warmth on the beaming faces of the crowd as they are hastily hustled out into the night air. Just as well, it’s freezing outside.

Fran (left): 8/10 “I thought it was going to be good anyway, but it was a lot better than I thought. They got the balance between the live instruments and the recorded stuff down really well.”
Eddie (right): “Their VJ was really good, the visuals behind them were mesmerising.”

Sarah: “We saw them at Bestival and they were really good, I just liked how they used a mix of live drums and mixed stuff.”

Emily: 9/10 “Bloody brilliant! It was really really good. I’d heard from friend’s about it, then I heard a couple of tracks and realised I knew quite a lot of their stuff.” 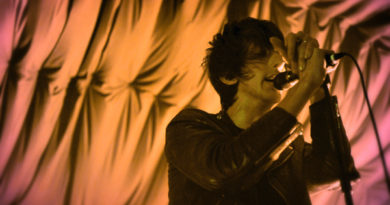