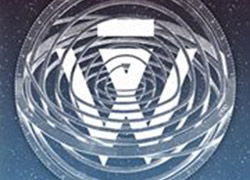 Never more so has the integration of sound and visuals created such a panorama, as tonight. The collaboration between Pop- Up Brighton and Sound Screen creating atmospheric and enchanting performances has become quite an event around Brighton, holding host to some of the cities most attention-seizing visual artists and musicians. Tonight’s venue provides the perfect backdrop to an immersive experience of captivating convergence.

Wild Cat Strike begin the night with their aggressive but harmonious alternative folk rock presenting an energetic and enticing start to the show. Next up, experimental four-piece and producer Luo create an intense mixture of piercing electronics and ambient progressive rock. With trip-inducing visuals accompanied by video artist Melissa Kitty Jarram, each movement on screen was perfectly in sync with the beat, transporting you into an hypnotic aura. With intense build-ups and dramatic drops, Luo’s performance makes for a seamless accompaniment to the peculiar but wonderful visual display.

Headliners Written in Waters have been tucked away preparing new songs and with the contribution of Irie Pixel’s visuals, tonight was the perfect way to showcase them. No strangers to welcoming futuristic visuals to their live performance, this band have already blown away audiences at previous Sound Screen events and tonight is more of the same. Beginning their set with a brand new heavier song, this suggests a welcome change in direction from the band; vocalist Beth’s voice shows unparalleled range in new songs, along with jazz-like and more experimental instrumentation. As they burst into epic single “Hymn” and fan favourite “Leigia” the audience are completely entranced – making their mark as one of Brighton’s most talented bands.

With the advanced visuals and experimental sounds of tonight’s performers, Pop- Up/SoundScreen have put on yet another astounding cultural event. The way in which both the sound and visuals complimented each other creates an atmosphere-enhancing unity and an incomparable experience.