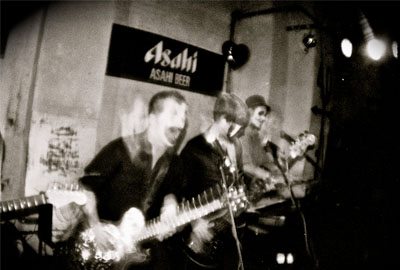 Having been longtime supporters of The Slytones and their debauched cause, we at XYZ were chuffed to hear that the Garage Blues quintet were finally releasing their much anticipated sophomore E.P, ‘The Psychedelic Sounds Of…’.
So you can imagine how pleased we were to discover that support was coming from Canterbury Prog-Folk genius’ Syd Arthur and fellow Brightonian (and Flamenco extraordinaire) Darius Alexander.
Thankfully, the latter was greeted by early arrivals with all the warmth and sincerity that features so heavily in his music.
Local Indie aficionado’s will know that Darius formerly constituted one fourth of local quartet ‘The Blueskies’, and it’s good to see that he’s lost none of his hook-laden song-writing abilities with this new project.
Supported by his superb backing band, Alexander combines intricate flamenco rhythms with Worldly Pop melodies and Dancy beats which act as a perfect set-up for the main support tonight.
Syd Arthur have been noticeably absent from the brighton scene since touring the festival circuit last year. 2008’s debut E.P ‘Kingdoms Of Experience’ featured some of the most excitingly mind-bending Folk music we’ve ever heard. So it was with genuine butterfly inducing excitement that we awaited their arrival onstage.
But tonight’s performance sadly lacked the inherent groove that so fuelled their previous meteoric hype.
The set consisted entirely of new material which, despite being a glorious show of musicianship, served better in confusing the audience than amusing them.
Despite the disappointment, the heaving room was now alive with the heavy breathing of a crowd who knew all-to-well what was in store. And as those familiar silhouettes took to the stage for what was undoubtedly their most important show yet, the crowd welcomed The Slytones with an eruption of fevered howls.
As they kick off their set with a cacophony of movement,  you can tell from the look on their painted faces that this is a moment they’ve been working towards since their inception five years ago.
As they trail-blaze through their own twisted greatest hits, there are crowd singalong’s, audience invasions and even accusations of sexism (a reaction to frontman Ashly Edward’s testosterone soaked advances). As the sweaty mayhem continues, it’s clear to see that the band of merry psychos are on top of their game, executing what many are calling their greatest performance yet.
Keyboardist Chip Phillips paces the stage like a caged wolverine, whilst bassist Carl Brothwood replaces his usual reserved persona with intense rhythmic lacerations. New drummer Rob proves he’s filled some seriously large shoes and adapted the pulsating beats to make them all his own.
The end result is a dripping mess of perspiring bodies, gargoyle-like faces and wall-to-wall smiles. The boys have done us proud. But where do we go from here you ask? Well, the next box to tick on the boys list is the debut album of course. Bring it on.
Words by Jimmy Volts.