With his guitar slung very purposefully around his back, frontman James Steel waited poised in front of the drums with perfectly coiffed rockabilly facial hair. The four piece then threw themselves into bohemian playground stomp that was really quite exciting. You could even sense the repressed instinctive urge in the room to engage in a form of elated primitive war dance, as we remembered the day our ancestry successfully killed the last of the mammoths. However, it being a sleepy Monday evening at the Freebutt and the fact that snakebite is no longer charged at £1.50, we smiled and tapped our little feet.

The sleazy smart outfit are true masters of their sound, the notes don’t ring they thud. It’s all too clear in their rendition of “Chateau” that their name suitably matches their music… they grunt and howl and hit things that they probably shouldn’t, it’s that same straddled percussive march that you find in Tom Waits’, “Rain Dogs” but presented with so much more urgency. Although far from ‘anthemic’ their live performance demonstrates a band capable of a formidable sound.

Half way through the set, Steel well and truly gets his Elvis on, and provides a visual performance more intriguing than any pyrotechnic gimmickry or disturbing novelty spandex. In large strides across the small stage, he diminishes any cynical thoughts that this is contrived and rehearsed, fulfilling the role as band leader up an above what is required of him. He slides down on to his knees, reaches out a pleading hand and begs us to ‘let it rain’.

However the band does appear to have struggled in capturing the energy of their live show on tape. It almost seems like their obscurity is fitted and directed towards the songwriting but more of a creative and dramatic band performance and the crafting of a unique onstage atmosphere. Perhaps they have recognized this as they recently recorded their debut album as a live show, inviting audience members along to contribute to their noise making. The release date for this album is still to be confirmed but they’re back in Brighton for this year’s Great Escape festival and well worth checking out. 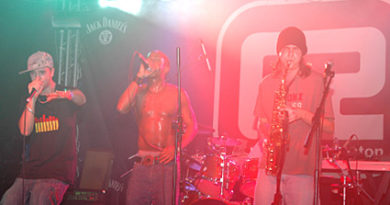 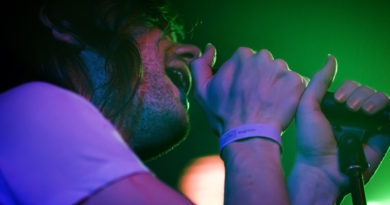