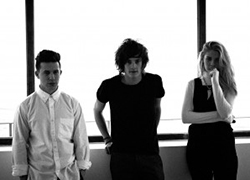 London Grammar: As Spooky as the Sea at Night.
The powerful vocals of Hannah Reid echoed across Brighton’s night time seafront, as London Grammar performed at the fittingly enigmatic Concorde 2. The fresh faces of indie pop left their audience touched by their standout, eerily stunning sound.
Emerging from university halls in Nottingham, this band’s rapid ascent to success has been furthered by their high profile collaboration with Disclosure, Help Me Lose My Mind, and captivating debut album If You Wait, which reached number 2 in the UK charts. Reid’s versatile voice effortlessly rides the peaks and troughs of her emotional lyrics, essentially but unobtrusively accompanied by Dan Rothman and Dot Major. Politely alternative, they appeal to a wide audience, whilst the raw vulnerability Reid exudes separates the band from counterparts such as AlunaGeorge and Lorde. Comparisons to the spectral sounds of The XX and up and comers Bipolar Sunshine seem more appropriate, as they epitomise the growing haunting pop of 2013.
Silencing the crowd with a chilling rendition of Hey Now, London Grammar were mesmerising from the off. Reid’s vocals suspended in the centre of each song, atmospheric reverb and dignified percussion in Flickers, or icy chords and trembling breaks in Stay Awake, enveloped the entire set in supernatural stillness. Chit-chat about the America tour in-between songs provided a welcome insight into the rarely-interviewed band’s personalities without breaking the mood. Whilst a bewitching cover of Kavinsky’s Nightcall proved their acoustic abilities, with faultless piano and delicate harmonies, the vigour of their encore, Chris Isaak cover, Wicked Game, showed they can do ‘lively’ too.
Firmly cementing London Grammar as an act to watch, the young band triumphed in a beautiful performance that displayed their spine tingling sound as its very best. Embarking now on a UK tour, they are looking at sellout gigs as their success continues to snowball.
by Harriett Hall