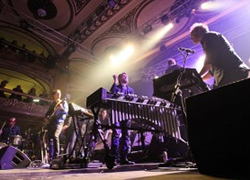 “Seven years is too long” lamented drummer and frontman Martin Horntveth between intimate, right on the groove drum beats, urges to the crowd to cheer louder and an expression that showed a musician melting into the music he was making.
This autumn signals the long awaited return to the stage of Norwegian nu-jazz/electronica nine-piece Jaga Jazzist. Following flawless support from complex jazz prog-rockers the Physics House Band,  Jaga opened slowly with “Toccata” against a backdrop of giant stylised gambling machine signboards, from their rhapsodic single and last album “One-Armed Bandit” (2010, Ninjatune) – the live rendition of the single involved some exquisitely complex trombone work from Erik Johannessen. The crowd was as eclectic in age, style and outlook as the music, and the atmosphere was what you’d expect from an act of this calibre – one of intense anticipation.
Musicianship was staggering – main songwriter Lars Horntveth swapped effortlessly between lap steel, keys, guitar, synth and programming as well as a dizzying range of un-nameable woodwind instruments. Mathias Eick silenced the crowd with a glorious trumpet solo and stood out from the back with a giant upright bass. Andreas Mjøs took centre stage with a giant vibraphone accented by Line Horntveth’s glockenspiel. She also joined on flute, percussion and a tuba that dwarfed her in size.
Besides an obvious breach of gig etiquette from some people in the front row who insisted on talking through a lull in the music, the crowd was rapt and dancing throughout, and after the not-so-subtly executed encore, during which Martin threw t-shirts and drumsticks into the crowd, fans were left breathless by immersive and sublime renditions of “All I Know Is Tonight” and “Oslo Skyline”.
It’s always a pleasure to watch great music being made, but to see nine multi-instrumentalists at the peak of their abilities, ecstatically melding into every note, the love of fine musicianship becomes contagious. No jaded, sketchy power chords here: Jaga were truly revelling in their live performance – and so were the audience.
Words by Sarah Rayner
Find Jaga Jazzist at jagajazzist.com
theoldmarket.com