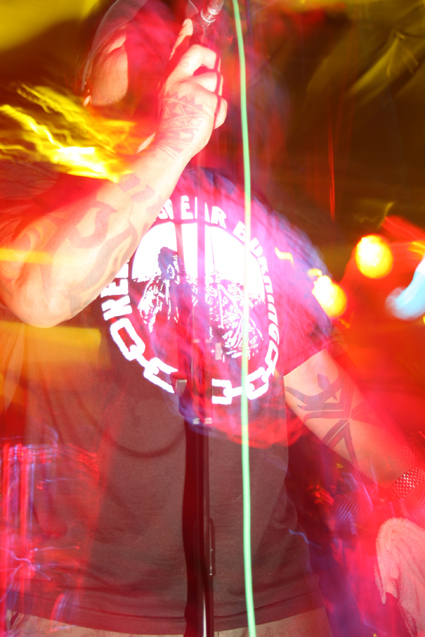 New Zealand’s Shapeshifter are a relatively unknown D&B band comprising of singer P. Digsss, a live drummer and a few others controlling an array of samplers, keyboards and the occasional guitar.

The set was energetic from the beginning with album opener ‘New Day Come’ played early, the swirling atmospherics and the kick-in of the drums sounding all the more satisfying live. The room were given an excuse to dance like loons. A breakdown into a relaxed guitar solo preceded a spin through the mellow ‘Time & Place’. Hidden behind a massive kit, drummer Redford Grenell hammered out perfect half- and double-time beats with an obvious ease that was present throughout regardless of speed or complexity of tune.

The introduction of guest MC KP from fellow NZ crew Sunshine Sound System saw the group move away from D&B and switch to pure hip-hop for ‘Southern Lights’. P Digsss vocals complimented KP’s smooth rapping style nicely and he remained present onstage for the rest of the show flitting between rapping, tapping a cowbell and running around with a video camera. What followed was some kind of hip-hop/rock tune that featured a massive, drawn-out, strobe-lit build-up that would have sent the place nuts had it dropped to D&B instead of continuing in the rock vein.

After wiping sweat from their equipment, Shapeshifter stormed through the last four songs, all drum & bass, with one in particular dispelling the myth that a live act can’t produce a proper filthy live sound.

London Elektricity no longer play live and Pendulum are going down the slippery slope (have you heard their new tune – sounds like Elliot Minor for fucks sake) which leaves Shapeshifter among a select few playing good, live D&B. Tonight, without a reliance on loops whatsoever, Shapeshifter proved that D&B can be performed live and, if done properly, with amazing results.