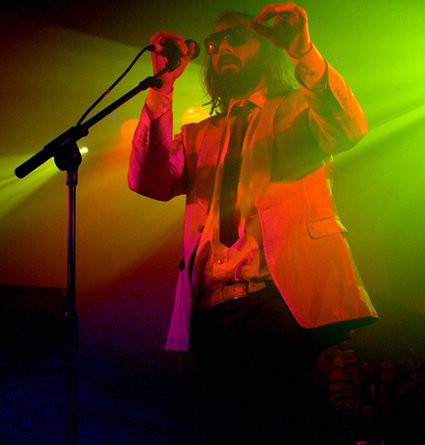 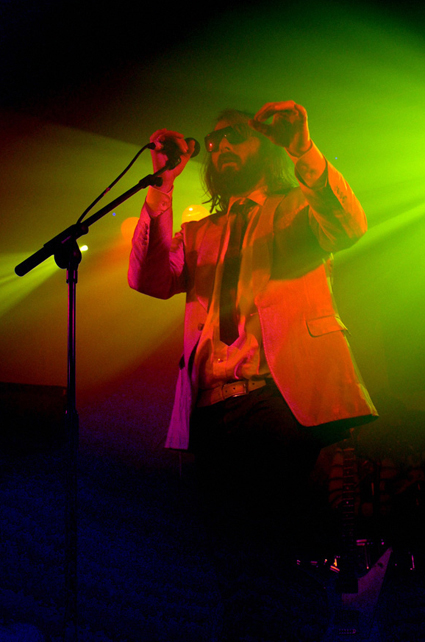 Sebastien Tellier oozes a perverted kind of sexuality as he saunters onto the Concorde2 stage. He emanates a holier-than-thou aura as he fondles his microphone stand, looking like a cracked-out, greasy Jesus bathed in iridescent pink neon but these idiosyncrasies only serve to seduce the audience. “Kilometer” is an obvious opener and rightly so, the Parisian-pop slow-jam immediately arouses the crowd into dreamy swaying from side to side. It’s the sort of laser-sex R’n’B that Justin Timberlake might make if he moved to France, ate mescaline and didn’t wash for a year.
The slightly more up-tempo, beatnik psychedelia of “Divine” is a guaranteed crowd pleaser and the audience gawp with their mouths open wide in an awestruck catatonic state as the effortless baroque beats fill every orifice. It’s like we’re stuck in a time warp of ‘80s progressive pop, keyboards and vintage synthesizers abound, except the audience would be in far funkier attire. Between the electro-pop vignettes Tellier pauses to glug gratefully from a bottle of Blossom Hill and mumble incoherent jokes that the crowd adore. His nonchalant disco resonates post-apocalyptic benevolence and his breathy murmurs over the delicate synthetic melodies are as captivating as they are haunting. “It’s like watching Yes in 1983” a friend tells me, but this is lost on my mere 23 years.
His 2008 album, “Sexuality” was produced by Daft Punk’s Guy-Manuel de Homem-Christo and his influence is evident but not stifling. Tellier’s native tongue vocals are carnal and provocative and the fact that he flutters from French to English gives the performance a foreign allure. The euro-synths sound like a camped-up John Carpenter movie score, and invoke images of alien sunrises on crimson planets that exist light years away from the Concorde2.
He closes his set with the languid “Sexual Sportswear”, the only track without lyrics on “Sexuality”. His electronica Francais is indeed soulful but it’s not actually as sexy as I expected. I wanted to be writhing around in an orgiastic crowd as Tellier poured massage oil all over us, and only once did I imagine sexy femme fatales wrestling in pools of KY Jelly under the Eiffel Tower. A gig for fans and connoisseurs certainly, but personally this baby-making music left me flaccid.

i really feel this zachary colbert (previously bollard) should write more articles as he is a very talented young man. He’s currently ghost writing my autobiography but still feel he has a little too much free time on his hands….send him to more shows i say! 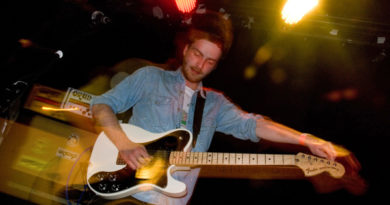