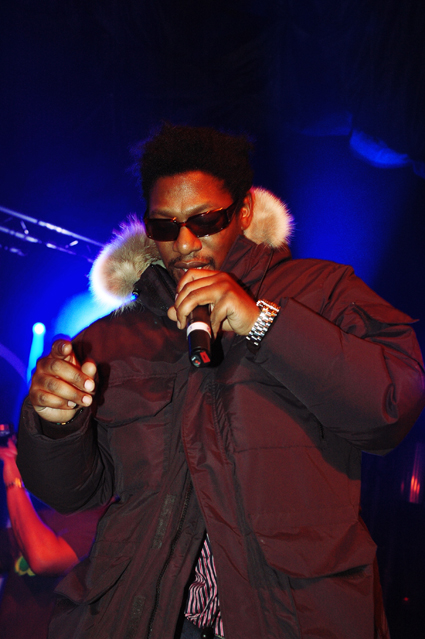 The last time I saw Roots Manuva was a short PA at Fabric backed solely by DJ MK, and while containing all the appropriate tunes, Smith seemed to just be going through the motions. Tonight, backed by MK, a drummer, a guy on keys and a couple of MCs, we got to see a much more relaxed and banter-ful Rodney Smith. Bursting on stage zipped into a massive parka he looked every bit the cool hip hop mogul, though having endured it a suitable amount of time to win a bet with his MC, the heat saw it quickly dispatched.
The first two songs came from RM’s latest release “Slime & Reason”. The shamelessly happy “Again & Again” was first off in a set heavily reliant on new material. After a dedication to the students who, in a packed Concorde, only just outnumbered the older RM fans facing work the next day, “Too Cold” from 2005’s “Awfully Deep” gave everyone who wasn’t fully up to date the chance to join in with the instantly recognisable chorus. The minor sound problems during the chilled “Movements” that caused a vinyl crackle effect on the mics seemed rather fitting, considering the tune was from Smith’s first album (“Brand New Second Hand”) nearly a decade ago. After a few teases, the dropping of “Witness”, undoubtedly RM’s best-known song, understandably got the best reception of the night. The fact that the crowd reaction was only marginally more energetic than the majority of tunes (in sharp contrast to the Fabric audience) was testament that, to the delighted crowd, “Witness” was just one of many good tunes they had come to hear.

The wicked, bass-driven “Seat Yourself” and the singalong “Dreamy Days” preceded a final stomp through the recent Metronomy-produced single, “Let the Spirit”, a tune that proves Smith has just as good an ear for a tune as always. Towards the end of an awesome set spanning Roots Manuva’s entire catalogue, comments such as “Don’t tell London but this show’s way better” and “Best gig on the tour” were being dished out plentifully. And though that’s probably been said on every night of the tour one of my companions put it perfectly when he said: “I think I actually believe him.”