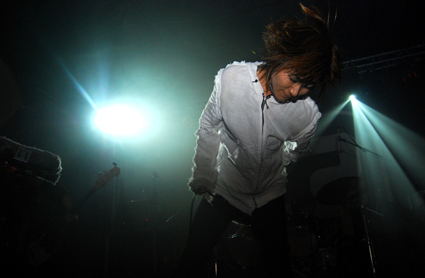 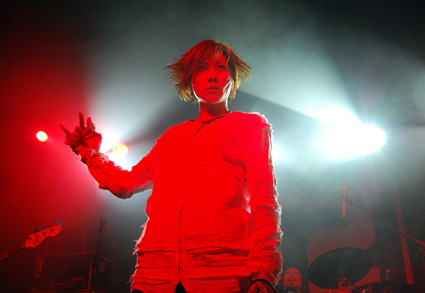 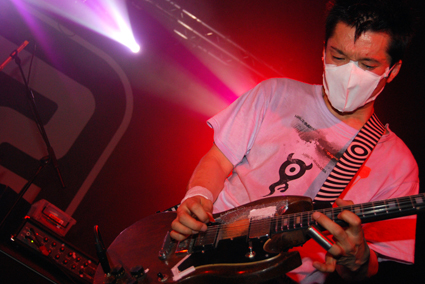 Yasuko Onuki, Agata, Rika Mm’ and Sudoh Toshiaki make up the troops of a Melt-Banana army that has savagely ransacked any terrain they have trodden on since their formation in 1991. Since then, the Tokyo four-some have established themselves as a force to be reckoned with in the world of adrenaline-driven rhythm.
Today was their first large gig on the English coast and how welcome they are. The band looked immediately comfortable but definitely deranged; Agatha (guitar) wearing a white surgery mask and Yasuko (vocals) wielding a loudspeaker. They were here to do the expectedly unexpected and the crowd seems, aesthetically, well-prepared themselves. The Japanese, as culture, are classically known for their efficiency and quality in production of all things mechanical and, evidently, now all things loud.
It is this instantaneous pace that acts as the constant for this group, setting a scene onstage that only comes through experience such as theirs. Yasuko Onukis’ siren screeches prune cracks in a wind-battered Concorde2 that would otherwise have been hidden and the crowd, suitably dark, is here to be broken, verbally attacked. Short and to the point, with so much information at such high speed who needs long songs? They play ferociously and precisely, to the point of obsession.
Melt-Banana seem diligent with their group input but excessively aggressive with their general output. The layered reverb alongside a Tourette vocal nurtures a sound so twisted a certain instability between band members can be sensed. It is a noise of the rectal vibrating class, humming a hypnotic head bang that seduces the watcher into a state of benevolent appreciation.

It is this dictatorship of noise that orchestrates a hungry and impatient Concorde2 crowd, who before then had to deal with the everyday. She gave them what they needed and we returned the favour, fuelling their builds and applauding any sort of release. John Peel backed them as do we.