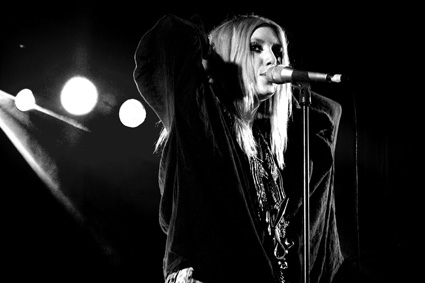 Is this heaven or is this hell? Lykke Li is a woman on the fence, the fence that is surrounding popular music today. Her debut album, “Youth Novels” has echoed greatness since its release earlier in the year and this is seen most visibly in the turnout at Concorde 2 on this midweek evening. Having been previously assigned to play at The Prince Albert in May but backing out due to a sore throat, one can only feel that that cold was destined, a postponed thought, to allow her full rein of the only stage deserving of this post-Madonna.

From the get-go a rapturous energy was instilled upon us, embodied by the first note that trickled from her lip. There is an obvious distinction in groove and grind to the live band that now seems diluted on the album. This is what made her recorded sound so haunted and transgressive and in turn makes the live backing explicit, as if she didn’t feel we could quite grasp her before she was screaming down our ears.
The set itself did, expectedly, consist of the said album tracks, but midway through her timeless renditions they broke into Vampire Weekend’s “Cape Cod Kwassa Kwassa” and then quite seamlessly attempted “The Sound of the Police”, whoop whoop! These upbeat nuggets ignited the now transfixed crowd with a well-earned change of pace and then saw them walk like lemmings off the Swedish siren’s cliff, to their conscious deaths, into her domain.

Her hit single “Little Bit” also saw a slight restructure but was yelped back by every individual, quite certain that they were the only one “down” enough to know the words. They were all “down” it seemed to me, a conglomerate of ice-cool: the British freezer. I felt like I had interrupted a private party put on by a weird dancing woman that I would soon marry; I too was well and truly seduced by this cloud walker and I liked it, a lot!