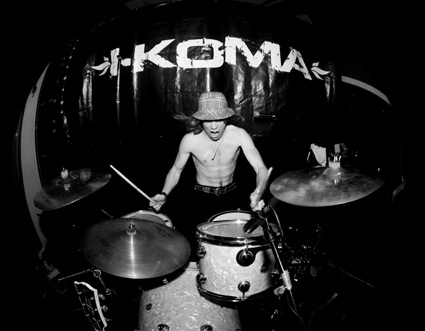 Although Brighton’s I-KOMA have been around the circuit for a few years, they have only found their feet when settling their current line-up eight months ago. XYZ reporter Mo Mostowfi heard promising reports so went to watch the live spectacle unfold at The Providence.There were a good few people at the venue that seemed to be there to see I-KOMA so tonight’s support acts almost went unnoticed. Even while the rock ‘n’ roll band headliners were tuning up people were taking to their places in eager anticipation of their first live offering.

The band starts things off with ‘This Kind Of Woman’, which blowed everyone away with an immediate wave of high-octane rock ‘n’ roll. Singer Davey Perry not only owns the stage but the whole venue, with the crowd in the palm of his hand. It is clear that this is how rock should sound: tight, catchy and full of energy. They don’t look back after this point, and their set seems to fly by.
Each song was introduced with a short synopsis about the band’s escapades and flirtations with drugs and sex. However, by the third song (entitled ‘La La La Hey’ – about “unadulterated fucking”, according to Perry) the songs began to mesh together and it got very hard to differentiate between them. But what does this matter? They were all catchy and sound great live. Only time will tell where their songwriting will take them, but for a young band the signs look good. All the vital ingredients are there: they have a great stage presence and they’re very, very tight. Beneath the hard rocking exterior it is plain to see that they’re a very hard working band. You don’t sound this good if you’re not.
As I said, the signs look good. I sincerely hope they can maintain this. I-KOMA are young, have a great image and, most importantly, are talented. Anyone can party all day and everyday, but not everyone can write catchy rock ‘n’ roll songs about it.