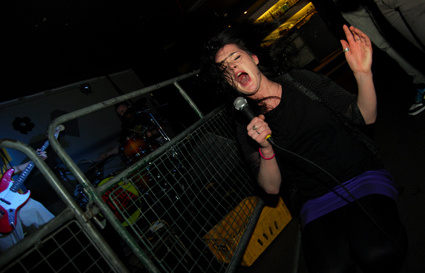 “Levi’s Ones To Watch” seems a precarious title that proposes great things. I was wondering if tonight’s acts would live up to the high standards naturally expected from the crowd. There are only about 10 people watching when Esben and the Witch start their atmospheric set, reminiscent of Bjork. More and more people arrive to support local band Gloria Cycles who are next up, with a fun indie/pop mix which gets the crowd going.
Unfortunately the crowd slims down again for the headline act, Fight Like Apes, so they sadly miss out on the reception they rightly deserve. The four-piece Dublin band, currently taking the Irish music charts by storm, make a big impression when they start up their set. The intro consists of keyboard player “Pockets”, wearing plastic goggles with flashing lights, slamming his palms and fists onto any keys of the keyboard he likes while the rest of the band make similarly disjoined noise to strobe lighting. It’s odd but endearing and I like it.
Maykay, the main vocalist, looks like a female Robert Smith of the Cure with full-volume black hair. She flips between screaming and lightly twiddling tunes down the microphone. Bass player Tom stares blankly at the crowd while playing on his knees. Mohawk-ed drummer Adrian can’t help but smile at his bandmates. It’s like watching a cartoon.
Pockets slams beer crates on the metal fence between the stage and crowd, and Maykay gives a fantastic performance of new single, “Jake Summers”, walking through the crowd singing to each person like there’s no-one else in the room. She curls up in a ball on the floor then crawls along in line with the stage. A Mclusky cover of “Lightsabre Cocksucking Blues” is awesome and I realise I am staring in awe at Maykay like Wayne pines over Cassandra in Wayne’s World.
Tonight was a fully interactive show and I felt like a kid in a science museum, wanting to join in play with all the toys. Fight Like Apes can rip up and stamp on the Levi’s tour title as they are definitely ones to watch very closely.