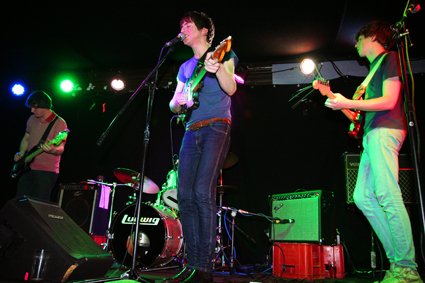 On a night when the world’s eyes are firmly fixed on the United States of America, there is something special unfolding at the Freebutt and it arrives in the form of modern day troubadour Eugene McGuinness. The fresh faced scamp arrives back in Brighton for the first time since his blistering summer shows at the city’s Great Escape festival – and this time round he is touring his self-titled debut album.

Eugene takes to the stage looking like he has been pulled from Rubber Soul era Beatles. He opens with two charming tracks from his fantastic 2007 debut mini-album, ‘The Early Learnings of Eugene McGuinness’ and follows them up with a touching rendition of new album gem ‘Not so Academic’. It’s captivating and Eugene looks totally lost in the music as he croons his way through the tunes.

After this short opening acoustic set Eugene is joined by his backing band, which features his younger brother Dominic in its ranks, and the crowd are treated to a set of pure pop perfection. The band truly complements Eugene’s songs, adding an extra bite and beauty to them. ‘Wendy Wonders’ is an amusing, slow-burning little ditty that cynically talks of lost love, while highlighting Eugene’s coruscating lyrics, the kind of lyrics that Pete Doherty thinks he has. ‘Atlas’ is a feisty little pop gem, while ‘Nightshift’ sounds like an uber-frantic Arctic Monkeys. It is a set that perfectly showcases a fantastic debut album, while Eugene barely pauses for breath between songs. The set hits its climax with current single ‘Moscow State Circus’ a pulsating, ramshackle, beast of a song, which leaves both band and audience with big smiles.

November 4th 2008 will go down in history as the day the world changed forever when Barack Obama became President. As the President-elect once said, ‘Not many folks spend a lot of time trying to be excellent.’ Well, Barack, we have found someone who has. The audience at the Freebutt tonight witnessed a truly unique talent. Eugene McGuinness is young, charismatic musician who is at the top of his game.

Really nice posts. I will be checking back here regularly.

This website uses cookies to improve your experience while you navigate through the website. Out of these, the cookies that are categorized as necessary are stored on your browser as they are essential for the working of basic functionalities of the website. We also use third-party cookies that help us analyze and understand how you use this website. These cookies will be stored in your browser only with your consent. You also have the option to opt-out of these cookies. But opting out of some of these cookies may affect your browsing experience.
Necessary Always Enabled
Necessary cookies are absolutely essential for the website to function properly. This category only includes cookies that ensures basic functionalities and security features of the website. These cookies do not store any personal information.
Non-necessary
Any cookies that may not be particularly necessary for the website to function and is used specifically to collect user personal data via analytics, ads, other embedded contents are termed as non-necessary cookies. It is mandatory to procure user consent prior to running these cookies on your website.
SAVE & ACCEPT
1
0
Would love your thoughts, please comment.x
()
x
| Reply
XYZ Magazine: What's On In Brighton & Hove