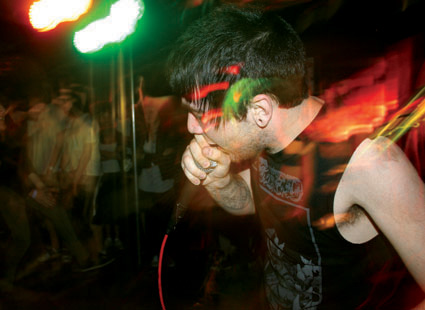 Despite a good turn-out for this seven-band bill headed by Centurion, the crowd seemed reluctant to enjoy themselves. A succession of grindcore support bands came and went, but the only band of note were Peterborough’s Kalo, who had an energy and urgency to their songs that can only be transmitted by an extreme metal band.
Now, what of Brighton’s own Centurion? Immediately, it was clear that there was no differentiation between the band members and audience; they were around the same age and even looked the same. Technical problems with an amp slowed things down and when the band did finally start it was something of an anti-climax, failing to stir the paralysed audience into a frenzy of anticipation. When they eventually did kick into their opener, a very small section of the crowd at the front began to start moving and finally, it started to resemble a heavy metal gig rather than a gathering of middle class teenagers. But, after a minute, the crowd went back to folding their arms and staring blankly. Like many underground metal bands, they need to work on their sound; there was absolutely no clarity to it at all. The guitarists looked busy, but you couldn’t hear a single note and it became was a distorted mess.
Also, there wasn’t any energy or charisma; the band stood like statues while their singer paced self-indulgently about in the empty space at the front of the stage. It seemed as if metal had gone back to the 1980s – all image and no substance. Songs aired tonight had the obligatory beat down and lyrics such as the charmingly bellowed “I fucking hate you” was frankly embarrassing. Along with their t-shirts (stating with bold capitals to: ‘EAT SHIT YOU SUCK’), a band like Centurion can only really appeal to a 14-year-old who hates the world.
Throughout the set, songs came and went and never really grabbed you, as the lack of movement by their ‘fans’ was testament. On the whole, metal bands like Centurion are common practice these days. Chances are, if you’re into metal or hardcore music, you probably own a lot of CDs that sound like Centurion, only better. 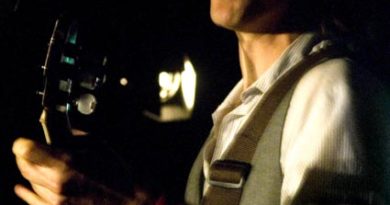