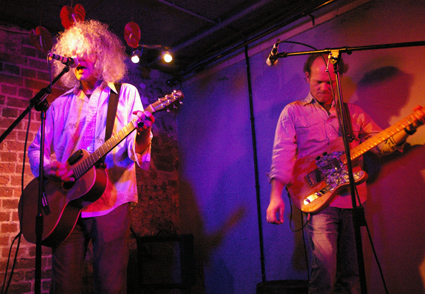 The Sanctuary, 2nd May

California’s self-proclaimed ‘cult hero’s cult hero’ Anton Barbeau plays songs which you might you hear in an American romantic comedy. He sings with a nasally voice and plays an acoustic guitar; reminiscent of an iconic ‘60s singer-songwriter? I’m afraid that’s where the comparison ends.

There is a comical element within his lyrics which he keeps up between songs, which gave the impression that he wanted to come across as a whacky American to us English folk. The trouble was, whacky Americans are seldom funny. Nearly all his comments were ironic, about his and British ethnicity. I got the impression that he was perhaps insecure about being an American. Whatever the case, the wraps between songs went on for far too long.
When he did start playing songs, despite the silly lyrics they flowed well. It was like he was telling a story; his songs were tuneful and melodic enough. It was very safe music, the kind your mother would like. Yes, they’re a bit on the corny side – the expected vocal harmonies are all there (provided by his electric guitar buddy) and every song has the same formula and structure. You’ve heard these kinds of songs countless times before.

Quite frankly, the music was as fresh as a bowl of fruit that’s been sitting in your kitchen for over a week. The song execution was okay, but the performance was lethargic and the compositions were very unadventurous. There are many great songwriters out there, especially from Brighton, but Anton Barbeau – all the way from California – just didn’t cut the mustard.

11th February 2010
Subscribe
Connect with
Connect with
0 Comments
Inline Feedbacks
View all comments
SEE XYZ IT'S ON! Click for more