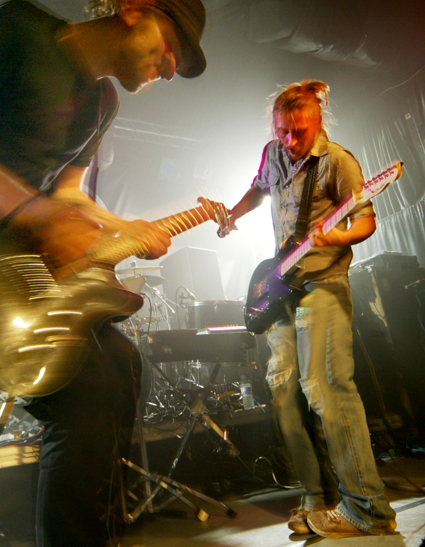 Experiments conducted in the 1960s found that exposure to 65 days of white noise would render the listener insane. Never confirming this as inspiration, 65daysofstatic remain guarded about their band and member’s names alike and shall therefore herein be referred to as Guitarist 1, Guitarist 2, bassist and drummer. Documented for their love of playing live, tonight’s epic show proved that they go way beyond the ‘instrumental post-rock’ label often attached to them.
Keen to let the audience know from the outset that this wasn’t going to be a straightforward rock set, Guitarist 2 sauntered on-stage to a sampler and started an FX-laden loop before Guitarist 2 wandered on and, again using a sampler, contributed a massive room-shaking bassline. Finally joined on stage by the bassist and the drummer the intro built to a filthy soundscape that would have been quite at home at a D&B night. An instant later the sound had wound down leaving just enough time for the “This band is unstoppable” sample that signals the members, now armed with guitars, and in full-on rock mode, to launch into ‘Retreat, Retreat’ with an explosion of energy and enthusiasm that remained infectious right to the end.
The next tune highlighted for the first time just how accomplished the band are as individuals, the drummer rolled around his kit hammering out a continually-evolving beat over which the other members squeeze every available sound and technique from their guitars. The switch from a growling bass-driven tune to heavy metal was flawless and again displayed the true musicianship of the band.
Throughout the gig the members constantly moved around the stage playing with samplers, keyboards, electric bongos and other random noisemakers. The majority of songs were constructed around pre-made samples, layers of bass lines and atmospherics, brought to life by the massive guitar sound, and undeniable stage presence. The use of synths and samplers allows 65daysofstatic to flow freely through different genres of music. The last part of the set was, for example, largely dance-based. In the finale of their storming set they took a rock-infused spin through techno, D&B, hardcore, all before waving a brief goodbye, dropping their instruments and walking off stage.
After a couple of heavy nights out I had hoped that 65daysofstatic would go easy on us, acknowledge that it was a Sunday and lull the weekend away with a few mellow instrumentals. Instead, they made me feel like I’d been to a music lesson, a rock gig and a club, in one night, ran between all three and, of course, loved every second of it.