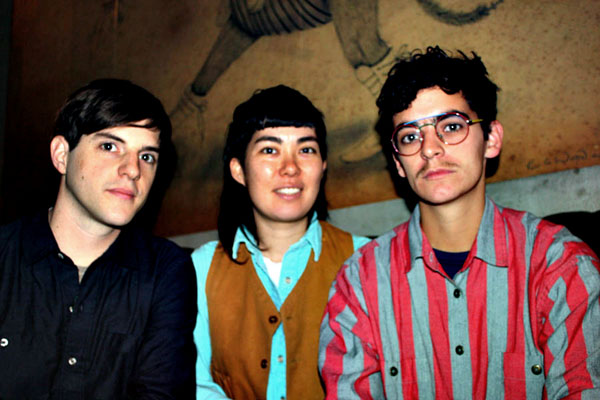 MEN are the latest electro pop fruit to be borne out of the long winding family tree that is the New York queer scene.  Joe Nockles caught up with JD, Ginger and Michael before their January 18 gig in Hoxton, to chat politics, Brighton and the imminent album.

You guys are sort of a Frankenstein band of different groups.  Could you just clear it up a bit for the readers, if we could get your names and the bands that you have come from?
JD Samson: I’m JD and I’m from Le Tigre and MEN and Hirsute and the New England Roses.
Ginger: I’m Ginger and the three of us also play with our friend Emily in the band Hirsute.
Michael: I’m Michael and I also play in the band Ladybug Transistor and Ginger and I used to play in a band called the Ballet as well.

And is Le Tigre still going, that’s current?
JD:  Yeah, we’re on a hiatus of infinite time and we are unsure if we’ll resume it, but we’ve been writing for other people and planning to release a DVD and probably do some other curatorial type stuff.

And am I right in saying that MEN is more of a DJ set than it is a live show?
JD: No… no.
Ginger: The complete opposite! It started as a DJ team but now it’s totally different and it’s a live project that includes beats, but also guitars and a lot of other styles and influences.

Where did the name MEN come from?
JD: Joanna from Le Tigre, who used to be involved with MEN and still is in a production sense, she had this whole philosophy called, ‘What would a man do?’ which was kind of like, we as women artists, we deserve to get paid the same amount as men, we deserve to not have to apologise for what we do and live our lives confident about the work we put out into the world. So, it was sort of a confidence boosting moment, but now the name MEN has kind of transcended that original meaning and now we think of it a lot more in terms of gender expression, what you call your self. Anyone can really be a man. What does ‘man’ even mean?

And you explore these themes in your music?
JD: Yeah, I think that queer politics and more; the economy and war torn living and all these things come into our music.

So, it’s a bit heavier than your average pop music?
[Laughter] Ginger: We prefer not to think so.
JD: Yeah.
Ginger: It’s more like pop music with content. Just like reality meets music.

How was the gig?
Michael: It was really rad. We had a good time. Good turn out. People seemed to enjoy it.
JD: We went to an after party upstairs. Like a regular riot girl party. It was a good night.

Did you get much chance to explore the city?
Micheal: Ginger and I took a walk down the pier, but there was a group of about thirty women partying. Like a sweet 16? We were scared we’d get accosted.
Ginger: I think you call it a hen party?
Micheal: Is that like a bachelorette party?
JD: Yeah. What’s it called when men do that?

Yeah, that probably makes more sense. Have you got an album in the pipeline?
JD: Yeah, we have a bunch of songs for the record. Right now we’re waiting on making a record deal or a distribution deal and trying to figure out how that’s gonna work. So, we’re on our way to finishing the record and it feels pretty sick.

Has the album got a name?
JD: We’ve worked with some names, but we haven’t made a definitive choice. [To the rest of the band] Should we tell them some of the ideas?
Micheal: I think we should let that be a surprise.
JD: OK.