Changes: The Return of Will Young

Back after a break of some three years (via a stint of acting both on stage and screen) Will Young returns this month with a new album: “LET IT GO”. XYZ caught up with the man himself to find out what he’s been up to.
XYZ: It’s been three years since the last album – was this a deliberate ploy to take your time with the record or did things like the acting just keep cropping up?
WY: A bit of both…I wanted to take some time with the album and experiment– if we wanted to send songs over to Nashville to add strings, or try a remix we could. Plus as you say things like the acting did crop up, it was something I had always wanted to do and there is work involved with that. If I had to go to Manchester for eight weeks to appear in a play then you have to go.
You’ve worked with a number of different producers this time, how did you find the experience?
It was scary! Working this way meant that the one thing tying everything together was my vocals. I’ve always worked this way because I can’t play any instruments but it’s worked out great – I’m really pleased with the way it all sits together. I’m proud of all my work obviously but with this album that pride just fills me up – I think it’s a great record.
There seems to be a lot of different influences on the record, what kind of things went into the writing?
I’m just into singers and songs really – people like Donnie Hathaway, Alison Krauss, Martha Wainwright…a lot of stuff went into it, even stuff like vocal house you know which is great fun for me both as a writer and a performer.
Interesting you mention Nashville actually, as there is a smattering of country on some of these new songs:
Yeah again, singers and songs – I’d love to go and record my next album over there in Nashville – I really want my next record to be…maybe a step away from the more pop stuff and be a more “song based” record – I think Nashville is the place to make that record – some amazing artists over there.
And you must be really looking forward to getting back into the live arena now after a pretty busy summer of festivals?
Yeah festivals are a great barometer, people vote with their feet so it was quite scary, but it was great that so many people stayed and listened. We’ve got used to the songs and the arrangements now so the tour should be great! The band are great and all the feedback we’ve had so far both critically and from the fans has been really positive so yeah – very excited.
Are you looking forward to the show at the Dome?
I love Brighton! I’ve just bought a place down there and have been doing it up. I get on the train with my bike and head down to escape!
Will you be heading out anywhere in particular while you’re in town?
Not really, I tend to do my clubbing in London and Brighton is my escape – wander round The Lanes, there’s a couple of great vegetarian restaurants. There’s just a great calm about the place…love it!
As we tie up our brief time together I put to Will that he’s managed to pull quite a neat trick in being able to have made the transition from reality pop star, to actor, to credible singer songwriter – such longevity in itself is quite a feat (just ask Steve Brookstein).
So what’s next for Will Young?
I want to take a year off and travel, see some of this beautiful world, maybe work with animals, something like that. It’s important in life – especially in the kind of job I have – to keep that grounding, that realism and take the opportunity to see some of this great world that we live in.
www.willyoung.co.uk 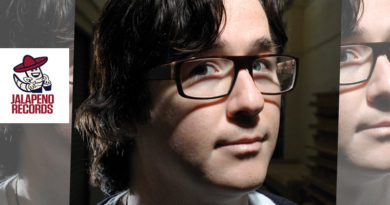 INTERVIEW: A quicky with Trevor At Brighton’s own Jalapeno Records…