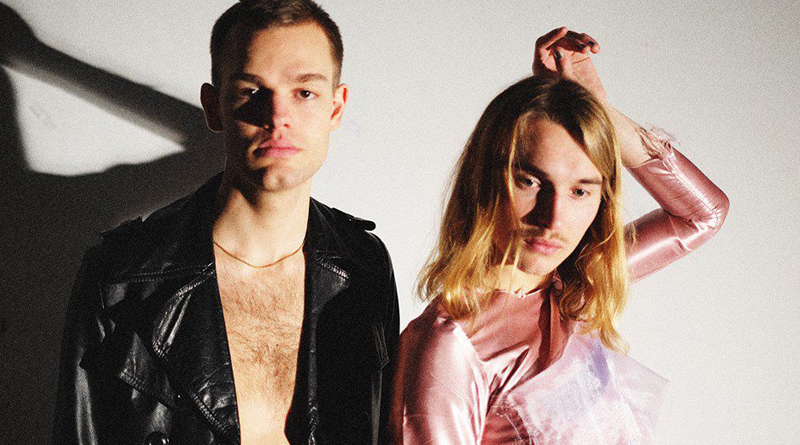 This Swedish act are the first signing for Present Artist Management, an affiliate company for Glassnote Entertainment Group, to be led by Jeffrey Neuberger, who has for the past three years served as the Head of Touring and Artist Relations at Glassnote Records in NYC – so the band are in good hands!

This month, we catch up with vocalist Tom Serner to find out more about their journey so far…

Hi! As it’s our first time talking to you, can you give us some background on how the band first formed?
It all began in Paris in 2014, with four 19 year old Swedish guys playing disco in abandoned warehouses to a decadent crowd of drop-outs and libertines. We finally managed to escape Paris in 2016, going home to Gothenburg to record “Deluca” which we sent down to our friends at a label in Paris, who released it. And it blew up. A few weeks after the release, the premier tastemaker in Scandinavia, Woah Dad!, signed us to their label.

Did you start out with a goal in mind? A band ethos perhaps?
To be really, really big with our eccentricities, with our songs and style intact.

Psychedelic disco! It’s a grand combination, which you guys carryoff incredibly well! How did your interest in these genres first come about?
Thank you! It’s simple, we love disco and we love psyche. We have a great psyche tradition in Sweden with bands like Soundtrack Of Our Lives and more recently Goat and Hashish. It’s broad. But we also love a lot of hip hop, certain classical music, jazz, soul and French electro.

And who were your biggest musical influences growing up?
We all had different influences, from Steely Dan, ELO and Earth Wind & Fire to glam, T-rex and Bowie, to funk, Daft Punk and Rachmaninov.

How would you describe your music in your own words, for those yet to hear you?
Debussy disco, boogie-circus, electro, Empressionistic haze… it’s just extremely deep, and super light too, haha!

“Empressionism” is a fantastic piece of work, especially for a debut EP release. Can you tell us how your song ideas came about?
Thank you again! Often a song comes out of 30 seconds in something much longer and 30 seconds from something else and so on. Then we just combine it and add some chaos. That’s it really. Very simple.

How about the recording process for the record? Where did this take place? Can you share an insight into the production process with us?
Melker, our phenomenal guitarist is the secret. We do everything in our own studio in Gothenburg. That’s all we’re willing to share with the Brits now that you’ve exited.

Ha! You’ve had some incredibly positive responses to the record in the press already. How does it feel to receive this kind of recognition for your work?
Incredible, really. We mean it. It’s humbling. We’re very, very grateful for the support. It’s funny, sometimes, before when we heard an artist say that she had no idea that a track would be very popular or well received you couldn’t believe them. Now we do.

Who is the ‘Ruby Empress’?
That’s our muse. She gives crazy people like us courage to do what we want in art. She has absolute confidence in us and is very supportive of all that is odd, stylish and eclectic.

You’re performing in the UK for the first time this month – how are you feeling about it?
We sort of imagine that London will be our second home, so we have to steal your hearts and do great shows. You know Gothenburg is called Little London…

Who would you support on tour in your own ‘dream scenario’?
Drake?

What else do you have lined up this year? Any festival appearances? Mor tour dates perhaps?
Yes, but right now, we’re not allowed to announce any of them. It’s frustrating, but we have to keep the deal with the festivals. (Readers can check back for more info on the socials).

There’s been some top quality music coming out of Sweden for the past few years – share with us some of your favourite home-grown artists to check out…
Oh, of recent there’s Amason, Nikki & The Dove, Wildhart, Mr. Tophat, Tingsek, Snow Culture, Little Dragon, Jonas Rathsman, Archipelago, Pomona Dream, Hashish and about 49 more…

What do you miss most about Sweden when you’re away?
The day it’s summer

If you were to collaborate with any other artists (living or dead), who would you choose?
Jeff Lynne and Frank Ocean – both preferably living!

Describe a typical day for Ruby Empress….
Turn on, tune in, drop out – a cliché, but true.

What’s the best festival you’ve been to in the last few years as event-goers?
Knarrholmen on an island in the ocean outside Gothenburg (sadly it doesn’t happen anymore), Festival No 6 in Wales and Traena in Norway.

April’s coming up, and that means April Fool’s Day! What’s the best prank you’ve ever played or had played on you?
One of our friends had a big art collection and had a babysitter for a night. He was very cheap and would hardly pay the sitters. When he came home the babysitter pretended to be asleep and the kid she was babysitting was sitting smiling happily in a pile of Banksy artworks totally shredded to pieces by the baby. He almost died. Of course the artworks were just copies his babysitter had put there. Then she said ‘April Fool!’. But he had to go to hospital…

It also means Easter and Easter eggs – what’s your fave Easter egg or chocolate?
The Choccywoccydoodah Fabergé ones from Brighton of course! We eat them listening to Beastie Boys’ “Egg Man”.

Which artists are you listening to at the moment?
This will be random as we’re ALWAYS listening to music but last hour: Gabriel Garzon-Montano, Anderson Paak, Childish Gambino, Soft Hair and Bon Iver, Flying Lotus, Kaytranada, D’Angelo. Tomorrow is a new day!